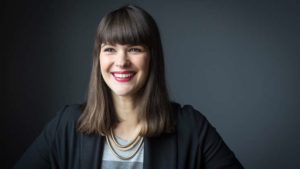 Assistant Professor at UBC’s School of Population and Public Health, a Canada Research Chair in Public Health Genomics, and a Senior Scientist at the British Columbia Centre for Disease Control. She is an occasional host of CBC’s The Nature of Things, a science communicator, and a children’s book author.

The work she does.

Dr. Jennifer Gardy’s enthusiasm for science is refreshing. Called “the new Suzuki” by The Globe and Mail, she is a senior scientist at the British Columbia Centre for Disease Control and regularly guest hosts episodes of The Nature of Things. She communicates, with immense charm and energy, the impact of science on our everyday lives.

Off-screen, her work spans key areas such as microbiology, evolution and computer science and she is an expert in the new field of “genomic epidemiology,” the study of how bacterial and viral genomes can be used to track disease outbreaks and epidemics. In her lab, she uses DNA sequencing to understand how outbreaks start, how they spread, and how we can use this information to stop future outbreaks.

On-screen, Dr.Gardy hosts the popular Myth or Science episodes for The Nature of Things, where she uses science to explore commonly held beliefs. Does drinking alcohol on a cold day really warm you up? Is the safest place to hide from a tornado under a highway overpass? And, does eating a different diet change the way our poop smells?

And if that’s not enough, Dr. Gardy is also the author of the children’s book It’s Catching: The Infectious World of Germs and Microbes, a “roll call of germs [that] makes for fascinating reading” (Kirkus Reviews).

Dr. Gardy’s enthusiasm for science started at an early age. In a 2016 interview with Canadian Science Publishing, she said that one of the things that got her into infectious diseases in the first place was a series of books all about famous scientists – from Isaac Newton to Marie Curie to Louis Pasteur – that were written for kids. The Louis Pasteur book was her favourite. She loved this cool guy doing amazing stuff with germs.

Her decision to become a professional germ hunter came after watching the movie Outbreak. And her journey down the path of science communication began with writing. Starting during her undergraduate studies, Dr. Gardy wrote for campus newspapers. She then went on to write for the Montreal Gazette, Seed Magazine and Simon Fraser University’s official newspaper. Connections she made through attending the Science Communication Program at the Banff Centre led to her first collaboration with CBC on a program called Project X. This led to opportunities with The Nature of Things and Daily Planet.

Dr. Gardy is all about making sense of science. She describes herself as “insatiably curious” and wanting to know why and how things work — and to satisfy that desire, she has to be able to come up with hypotheses and design experiments to test them.

She notes that logical thinkers thrive in the sciences, since science is all about following a process that leads to discovery. So even when that discovery leads to a hypothesis that ends up falling through, she sees it as opportunity to formulate something new.

She also believes it’s important for established science communicators – like herself – to take the time to share their experiences and the stories of their career paths with others to help inspire the next generation of communicators.

When it comes to the current state of science communication, she noted during an interview on CBC’s Canada’s Smartest Person blog that “it’s important to get better at letting people know that science communication isn’t just David Suzuki or Jay Ingram up there on a television screen hosting a show” but that there is much more content and information out there that anybody can access.

Her life outside of work.

Outside of the lab or the classroom, Dr. Gardy also finds herself leaning heavily on logical thinking, whether she’s hitting the courts for a game of tennis or heading for a hike in British Columbia’s stunning landscape. Even while hiking, her logical brain is highly active and comes in handy.

In that same interview for CBC’s blog Canada’s Smartest Person, she talks about one her favourite things to do outside of work – looking for mushrooms in the local woods. In her opinion mushroom hunting is like a grown-up version of Easter-egg hunting, but it has a huge logical component to it — by looking at combinations of features of a mushroom, a person can deduce whether it’s delicious, whether it’s edible but boring, whether it’s slightly bad news, or whether it’s deadly.

Advice to others seeking a similar career.

Dr. Gardy’s advice for burgeoning scientists and science communicators is to equip yourself with an interesting and diverse set of skills and make yourself a niche. As an undergraduate she studied science, but also worked at campus newspapers. It’s about the little steps that aren’t necessarily taken with purpose that lead you somewhere.