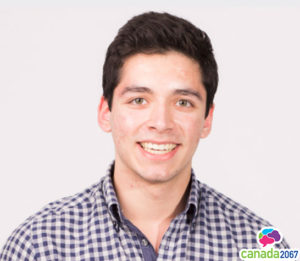 Rohan Nuttall is pursuing a Bachelor of Science degree at the University of British Columbia (honours in physics).

He has spent a summer working on electronics for the Quantum Devices Research Lab, and for a year as a scientific computing analyst at TRIUMF. That’s Canada’s national laboratory for particle and nuclear physics and accelerator-based science.

At TRIUMF, Rohan’s work began as a summer co-op and continued as a research project throughout his third year. He ran end-to-end simulations of TRIUMF’s ISAC (Isotope Separator and Accelerator) target system. That work, he says, “integrated diffusion, effusion, ionization and ionic transport in a vacuum, as well as temperature, desorption/adsorption, surface shape and opacity constraints”. In simpler terms: he helped to create an optimization scheme for producing and releasing radioactive ion beams.

He has given voice to students

The team says we can solve many of the biggest challenges facing education systems across Canada by enfranchising the largest stakeholder group: students. In particular, they focus on helping youth on the peripheries avoid falling through the cracks.

For three years, Rohan has also served on the advisory board of the Society for Safe and Caring Schools and Communities.

He already shapes the globe

The Global Shapers Community is an initiative of the World Economic Forum. It’s a network of city-based hubs developed and run by people ages 20-30 years old who want to develop their leadership potential towards serving society. For 18 months, Rohan served as vice-curator of the Vancouver hub.

He was a high school activist

While still in high school, Rohan founded The Young Wanderer, an online publication that showcased exceptional writing by high school students on current affairs. He spoke at rallies for education reform, was a member of the Globe and Mail’s student advisory council and, after visiting the Arctic, published an op-ed pushing for sustainable practices in extractive industries for the Greenlandic national newspaper, Sermitsiaq.

He directed a documentary about youth homelessness

Rohan’s film, Through My Eyes, profiled the homeless experience of young Edmontonians. “These youth taught me so much about the meaning of community, and the necessity to build places that are safe and caring for all individuals,” he said upon receiving a Youth Impact Award.

Through My Eyes from City of Edmonton Youth Council on Vimeo.

He spoke at TEDx Youth about entrepreneurship, innovation and the audacity of creativity

As a high schooler in Edmonton, Rohan spoke at TEDx about what defines success. He talked about pursuing your personal desires and aspirations. “Everyone needs to go on a journey of discovery, and take risks that are guided by your heart. It’s important that as youth we take the time to not just follow the status quo but to be adventurous. An audacity of creativity can propel us to places that we never thought possible,” he told the audience.

Rohan emphasized the importance of believing in your ideas but also getting uncomfortable. “Throw yourself in situations. Expose yourself to different things. Don’t wait for opportunities to come to you. We have to experiment whatever our passions, whether pursuing scientific inquiry, alleviating poverty or writing stories. We should take it upon ourselves to make those interests a priority and take them as far as we can.”