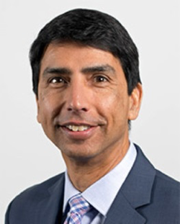 Bruce Rodrigues was appointed Ontario’s Deputy Minister of Education in October, 2016. Rodrigues formerly worked with EQAO (Education Quality and Accountability Office) as its CEO where he led the establishment of a new strategic plan for the organization and oversaw its efforts to modernize all aspects of the provincial assessment program. He holds a Master of Divinity and Bachelor of Education from the University of Toronto, as well as a Bachelor of Mathematics from the University of Waterloo. He is an accomplished writer of Catholic curriculum and has participated in numerous Ministry of Education committees.

Rodrigues has held several senior leadership portfolios including Director of Education of the Toronto Catholic District School Board, Associate Director of Education of the Waterloo Catholic District School Board (WCDSB), Superintendent of the WCDSB, and finally, President and Vice-President of the Ontario Catholic Supervisory Officers’ Association. Rodrigues spent 26 years as a high school teacher of math, English, computers, religion and physical education; a vice-principal, principal and superintendent before becoming associate director at WCDSB. Bruce’s outstanding track record in Ontario’s publicly-funded education system reflects his deep devotion to student success that has been the hallmark of his career.